Frances
Retired, living with my husband, Chris, in the south of France. 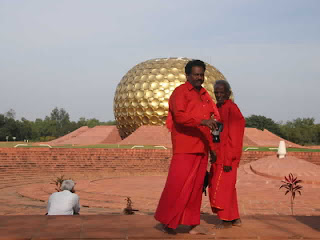 After breakfast I felt strong enough to brave the streets to catch up on some shopping. I have two grotty teeshirts which is not enough. I found that there was a huge clothing bazaar just round the corner from the hotel, endless little material emporiums and tailors. Picking at random, I bought enough cotton (nothing special) from an emporium and went round the corner to find a tailor. I've negotiated that the three blouses will be delivered on Sunday evening. Not easy as the tailors are all busy making clothes for Pongal. The blouses will cost me a total of 770 rupees (about three quid each). My shampoo was quite expensive - 7o rupees (about 80p) but the eyedrops (I have either an allergy or conjunctivitis) were only 34 rupees (about 40p).

I then went down to the sea front to book tickets for our afternoon expedition from the tourist office. Apparently this was once a very French street, but now it lacks sadly in character and the 'shore' is an unappealing rocky beach. Still, it is popular with Indian families. Apparently this is true of all beaches; families travel from afar and fling themselves with abandon into the waves, often with fatal results, since they usually cant swim.

Claire and I met for lunch, in a totally Indian dive, where we had delicious thalis for less than a pound and ate of spotlessly clean tables. The young man opposite us was on a day trip from Chennai and laughed at our inefficient efforts to eat our rice (only three little dishes of sauces - in Chennai there can be dozens) with our fingers. We have learnt that there is always a sink where you can wash your hands before and after the meal, and that of course one eats only with the right hand. Not so easy when you are breaking up a chepati. As we left the restaurant we noticed that several people were eating their rice with the teaspoon provided with the sauces. Shucks!

Then back to the tourist office to wait for our bus tour price only 90 rupees). Apart from a garrulous retired Englishman, a self-appointed tourist consultant from Kerala, most of the fellow passengers were Indian families, and we wre treated throughout the trip to the most extraordinary exotic Bollywood saga. Well I think it was Indian, and the scenery often looked like the hills round Gingee, apparently a popular location for Chennai filmmakers. But every so often we looked up and the hero and heroine appeared to come from another part of Asia. Very weird, but funny.

The tour was bizarre, but then we are in India. The first stop was a boating lake. The others rushed off for a 20 minute boat trip. We passed on this, and contemplated life sitting on a bench beside the water. But we made damned sure we got back to the bus before others to get better seats.

The main destination was the model town of Auroville, a dozen kilometres outside Pondicherry. The story goes back to the early 20th century when a Bengali independence fighter and guru, Aurobindo Ghose sought refuge in Pondicherry. After his death in 1950, his ashram in the city continues to flourish. Indeed the Sri Aurobindo Society (SAS) is a rich, powerful political and economic force. Reading between the lines of the Rough Guide it is quite a sinister body.

Aurobindo's disciple was a French woman, the "Mother". She was the one who in 1968 began the foundations of the new city of harmony, Auroville. There were apparently 124 countries involved in this initial stage, today there are just over 2000 residents and the aim is for an eventual city of 50000.

The settlement is apparently an experiment in peaceful living - a non-religious movement, though there is a lot of talk of spiritual consciousness and inner peace. There are apparently experiments in ecological housing, eco-friendly agriculture, schools which have no exams and are orientated towards self-discovery rather than teaching, all energy is solar or windpowered - and so on. The philosophy is that you attain inner calm through hard physical work, though one of the small industries which earns them money is apparently a thriving computing business.

According to the Rough Guide, the residents are understandably pretty fed up with the stream of tourists, so we were not too annoyed (though frustrated) that we did not get to see any of their houses or work, and caught only the odd glimpse of a (usually European) resident.

Instead we were taken to Matri Mandir, the dwelling place of "Mother" and the heart of Auroville. There we saw a huge tree, the centre of the settlement, a huge Roman or Greek style amphitheatre, with at centre the post containing earth put there by the original 124 participating countries and as a backcloth a most amazing giant gold space-like globe containing a giant chrystal ball of special significance to the community. This is at present closed for restoration, but I fully expected to see characters in space suits emerging. Visitors were asked to be silent in the auditorium and by Indian standards they were. I did wonder what a predominantly Hindu people (though lots of Catholics in Pondicherry) made of all this, but it is clearly an extremely popular tourist destination. And really, despite our sceptical philosophies, Claire and I were both pretty impressed with the place.


There was a frustrating lack of information about how Auroville actually works, so I studied the Rough Guide and pumped our guide with questions. I'm not quite sure how reliable his answers were, maybe he just wanted me to stop asking questions. The people live in a number of communities within the settlement, just like any town, and get paid 4000 rupees per month (seems quite a lot by local standards, given they dont pay rent) for their work.

Government is by a council. When I asked in what language, the guide replied, in English. When I expressed surprise, given the history of Pondicherry, he agreed, French and Tamil as well. So who knows.

After the Mother's death, Auroville fell out with the SAS,which blocked funds to it until after a law suit. Funding is now restored, but it still perplexes us as to how it survives. But all power to them.

The next stop was another bizarre one, to a huge temple under construction (no photos allowed, dont know why since usually you can photo the exterior of temples). We had to walk along way over pebbly sand (very painful for us softies), past a huge roofed hall which seemed to be decorated with newspaper, rather like papier mache. Weird. The main part of the temple was big but otherwise not impressive. So why were we there? And who pays for new temples like this?

The final stop was the SAS headquarters. We opted out of this and headed to a coffee shop to collapse. Joined by the garrulous man from Kerala.

Then on to an internet place where I totally failed to make a connection to update this blog. So I waited until Claire had finished hers and then we went off to treat ourselves to an Indian-French meal at the Rendezvous, an upmarket restaurant packed with more upmarket tourists in the more French area of town.

As we climbed the steps a couple leaving said to us "well worth it". They were right. I had delicious tiger bay prawns and boiled vegetables, washed down by a Kingfisher beer and finished off with a slightly less brilliant cheesecake. Claire had a fish curry followed by a more successful chocolate mousse. Naughty us, it cost 600 rupees each (7.20 pounds). But we deserved it, we said...

We sat talking for hours. I havent really said much about Claire, but she is tremendously good value. Her degree was in genetics, but as there wasnt much work in this area, she left NZ for her OE (overseas experience) assuming wrongly the same would be true in Britain. So she ended up in Glasgow working for a company which sets up and runs call centres for companies. As she says, she 'blagged' her way into IT jobs, starting by writing databases and progressing rapidly to project management. When her original company was bought up and went downhill, she progressed to similar work in Birmingham but finally left, partly because her sister was getting married back home and she wanted to use the journey to do the travelling bit of the OE, and partly because she really could not stomach the call centre industry any longer.

She is a highly intelligent, very forceful 32-year-old, who probably scares the pants of many of her contemporaries. The sort of person I would have loved to hire in the Edinburgh computing service.

We've teamed up for the next part of the journey too, but I have said that she should only contribute within her planned budget, as her savings have to last till her flight to the UK in April. It would be nice to share the costs equally, but her company is what I am really benefitting from.

Claire then went off to her downmarket guesthouse and I returned to my relative luxury.
Posted by Frances at Saturday, January 13, 2007

We are a gaggle of volunteers and starting a new scheme in our community.
Your website provided us with valuable information to work on.
You have done a formidable task and our whole community will be thankful to you.

Saved as a favorite, I like your web site!